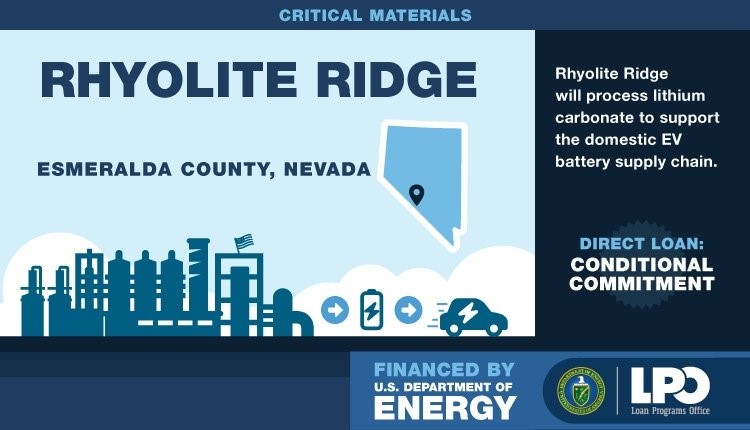 January 20, 2023: The US Department of Energy’s loan programs office (LPO) said on January 13 it had made a conditional offer to lend up to $700 million to develop a mine in Nevada for lithium carbonate for EV batteries.

The Rhyolite Ridge Lithium-Boron Project is being developed by Ioneer.

If finalized, the loan would finance the onsite processing of lithium carbonate that could potentially support production of lithium for approximately 370,000 EVs each year.

This project could reduce annual gasoline consumption by nearly 145 million gallons and prevent the release of 1.29 million tons of carbon dioxide each year, the LPO said.

Ioneer entered into a purchase agreement in September 2021 with Sibanye Stillwater Limited, a mining and metals processing company, to establish a joint venture related to the Rhyolite Ridge project.

Sibanye-Stillwater is a valued interested party and expected partner in the project, the LPO said.

Rhyolite Ridge already has offtake agreements with a number of auto companies and battery manufacturers including Ford, Prime Planet Energy & Solutions and EcoPro Innovation, with contracts ranging from three to five years.

The LPO said: “While Asia currently dominates the lithium carbonate refining process, the Rhyolite Ridge deposit is one of two known sizeable lithium-boron deposits in the world and is expected to be the second lithium mine in the US.”

Last February, the Department of Energy moved to shore up domestic supply chains for critical battery materials with the release of a report aimed at guiding the US toward energy independence — ‘America’s Strategy to Secure the Supply Chain for a Robust Clean Energy Transition’.