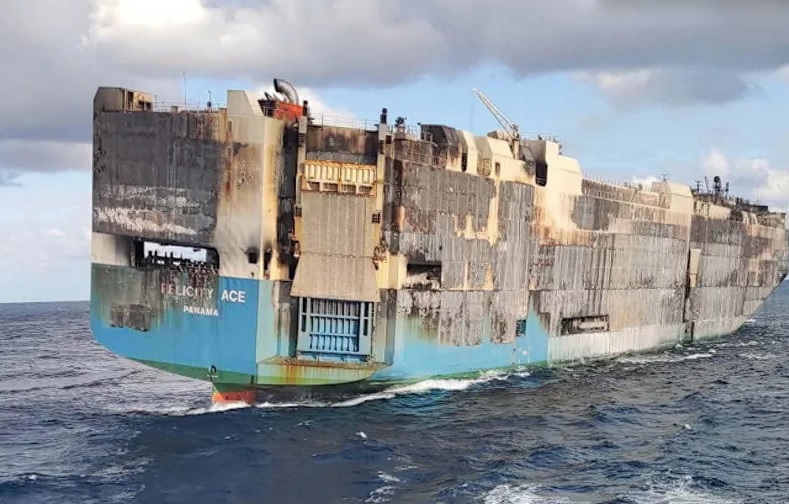 May 13, 2022: A new report released on May 10 warns that the lithium-powered so-called ‘green energy’ revolution is increasingly hazardous for shipping safety — with electric vehicle battery fires contributing to clean-up costs and causing environmental concerns.

According to the Safety & Shipping Review 2022, published by corporate insurance carrier Allianz Global Corporate & Specialty (AGCS), the rise in popularity of EVs represents “a significant difference in risk profile for shippers when compared with traditional vehicles”.

Following more than 70 reported fires on container ships alone in the past five years, the report says a major rethink of vessel designs, fire detection and fire-fighting capabilities may also be required.

The report cites the incident in February, when a fire broke out aboard the car carrier Felicity Ace (pictured) in the Atlantic.

The vessel sank in March with 4,000 vehicles, including EVs, worth an estimated $400 million-$500 million on board, while being towed to rescue, the report says.

“Given the vessel sank, the exact cause of the fire may never be known. However, it is thought the presence of lithium ion batteries on board aggravated conditions.

“EV lithium ion batteries could potentially ignite if damaged, are susceptible to cargo shift in rough seas if not adequately secured and can also combust with an increase in temperature from a nearby fire or even during on board charging,” the report says.

“Fires require a large volume of water to extinguish and cool the surrounding area, which can, in turn, endanger the stability of the ship. Crews will need to be specially trained and equipped with appropriate detectors and fire extinguishing equipment.”

Captain Rahul Khanna, AGCS’ global head of marine risk consulting, says in the report: “The costs of responding to incidents and clean-up are now typically many multiples of the ship’s value.

“We now have ships that are almost too large for the crew to fight fires effectively. There needs to be an urgent review of fire detection and fighting protections and equipment on board large container ships.”

Cargo mis-declaration is another problem, the report says, citing an incident in August 2021 when a container full of discarded lithium batteries caught fire in the US while being transported by road to the Port of Virginia, where it was due to be loaded on to a container ship.

The cargo had been wrongly declared as ‘computer parts’ and the US Coast Guard said that the incident could have been catastrophic had the containers caught fire after being loaded aboard the ship.

Cargo vessels accounted for half of all 27 vessels lost around the world in 2021, according to AGCS.

Energy Storage Journal reported on March 3 that China has called on the International Maritime Organization to consider a shake-up of maritime safety rules for EVs being shipped by sea.