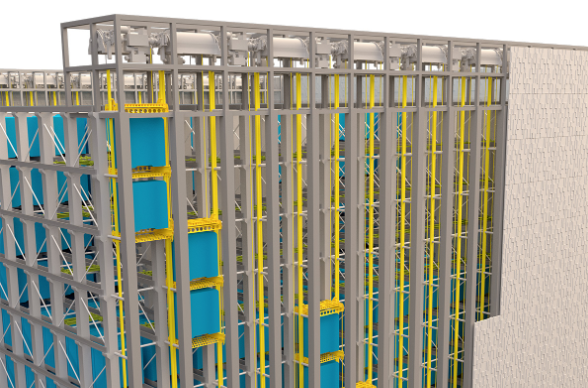 May 13, 2022: Energy Vault Holdings has broken ground on its first gravity-based energy storage system in China, the company announced on May 5.

Energy Vault said the 100MWh ‘EVx’ is being built next to a wind farm and national grid site in Rudong, near Shanghai, in partnership with Atlas Renewable and China Tianying (CNTY).

The launch of work in Rudong follows a $50 million licensing agreement between Energy Vault, US-based Atlas Renewable — which supports companies in project dealings with Chinese institutions and regulatory authorities — and CNTY, a Chinese environmental services firm.

Energy Vault uses a block tower system to store and release renewable energy from wind and solar operations. It uses surplus renewable energy to store power by constructing the tower with a crane. When demand rises, the crane unstacks the tower, producing kinetic energy by dropping the blocks so that they can turn generators and create electricity.

“China is rapidly expanding its use of renewable energy coupled with annual energy storage mandates in order to meet its decarbonization goals. We are very pleased that EVx and our energy management software platform have already received local regulatory endorsement and is being deployed now as a critical enabling technology to support China’s energy transition and carbon neutrality goals.”

Image: Rendering of the EVx design, courtesy of Energy Vault.