Energy Storage Journal spoke to RedT’s Scott McGregor about why he believes his firm is poised to capitalize on the new tipping point for the price of renewable energy.

2017 could well have marked the beginning of the end of the stand-off between lithium-ion and lead-acid batteries as grid-scale energy storage options. But not because either has proven more successful than the other: more because there’s a new player in town.

The not-so-new kids on the block, vanadium redox flow batteries, are be-ing promoted and researched in more and more countries around the globe.

Most notably in China, Rongke Power, for example, is in the process of installing what could be the world’s largest battery. This is a massive 800MWh storage unit covering an area equivalent to 20 football pitches, which will balance grid supply and demand in Dalian, the capital city of northeastern Liaoning Province.

By the end of 2017, 100MW of stor-age is set to be installed, the remainder in 2018. The technology behind vanadium redox has taken time for it to mature but since the first com-mercial installation in the mid-1990s the technology has moved forward though adoption rates have been slow.

So why a promised boom now? One of the main drivers has been the plum-meting cost of renewable energy — particularly solar power.

Scott McGregor, CEO of the UK based RedT Energy, says he knew 17 years ago that vanadium flow ‘ma-chines’, as he insists on calling his en-ergy storage systems, would become commercially viable one day. He just didn’t know when.

“We’ve been waiting around for various macro factors to fall into place,” he says. “Solar prices had to come down to make it economically viable. And they’ve come down — in fact they’ve only started to come down as there’s still a way for them to fall. Then power prices had to go up, which they have. In Australia, where we have cracked the market wide open, they are extremely expensive. 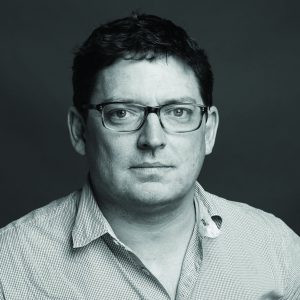 “And there had to be an ability to earn money off the grid. That’s now possible — there’s now a trading advantage, a platform where people can actually trade their energy to make money.

“Even three years ago it would not have made economic sense, but now all of these factors are in place. It was no use bringing this on to the market until customers could make money and numbers had changed, and now they have. It’s a pricing tipping point, and we have reached it. And now the UK and Australian governments are among those who are supporting it.”

“There’s a misconception of energy storage as a whole. People think of generating energy as quite simple — it’s either solar or it’s wind. People will judge whether it’s high quality or low quality, but they will see it as the same thing. Generating power.

“People have the same idea with storage — that it’s just storage. But they need to compare the technolo-gies, because they’re not all right for every application.”

So while other technologies are tap-ping this potential and also providing storage options, they can’t compete with the cost, life cycle or perfor-mance, RedT’s market communica-tions official Joe Worthington says.

“We look at the price over 25 years,” he says. “If you factor in everything — inflation, depreciation, operation, maintenance, replacement — we are significantly cheaper than lead and lithium. That’s how project developers are looking at things now, the kilowatt hour cost.”

At the moment, the go-to technology for storage appears to be lithium-ion batteries, but as McGregor says, they only provide 15-30 minutes of power in the event of a black-out. His machines can store much more than this.

One such project is the Olde House, in the southwestern English county of Cornwall, where 1MW of the RedT machines have been installed at a 600- acre farm-cum-holiday apartment complex though the utility Centrica. 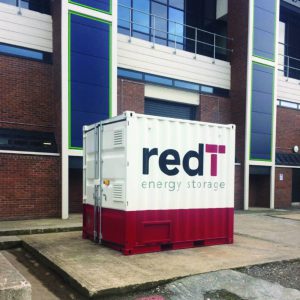 The battery is the first to participate in Centrica’s local energy market trial, which will provide a trading platform where the farmer is able to trade any excess power with other consumers, thus making money and ultimately paying back the cost of the machines.

In this way, businesses will be able to save money by generating energy and storing it for use when the cost of grid energy is high (in the evening), or make money by trading it with other consumers, McGregor says.

In McGregor’s native Australia, where the use of solar power is, in his words, a no-brainer, the university of Monash in Melbourne has agreed to install a 1.2MWh vanadium flow machine, along with a smaller lithium battery.

The two will work in tandem to store energy generated by solar panels at a biomedical research facility at the campus, saving energy costs but also with plans to trade the energy in the future.

McGregor says the vanadium flow battery will be the big ‘boring’ workhorse offering storage hours’ worth of electricity, while the lithium battery will supply short-term bursts of energy as required.

“Their energy needs are quite complex, it’s quite a big university and they’ve got labs and a variety of needs,” says Worthington. “They have quite a high baseload, which is almost 24/7, and at random times of the day they get a big spike. It’s being installed with a view to going off grid eventually.”

“We were going to wait to go into Australia, but we couldn’t not go there because the price of the power there is so high,” says McGregor. “It’s a perfect storm of three aspects: solar prices coming down; the incredibly high price of power in Australia; and a ropey grid system.

As well as RedT’s orders in the UK and Australia, the company has made agreements with distributors in central and eastern Europe and southeast Asia, details of which are under wraps apart from the company confirming an initial commitment of 12 units.

Flow batteries come into their own in the remoter regions of the world, where no grids break down since there simply are no grids, and where the installation of a microgrid would provide invaluable energy storage to replace the commonly used polluting and expensive diesel generators.

South African power utility Eskom has confirmed it will test a vanadium flow battery developed by the South African firm Bushveld, and another by Uni Energy Technologies, over the next 18 months with a view to investigating all of the applications RedT says the machines are ideal for: smoothing wind and solar power loads, providing black start capabilities and load shifting.

The local Engineering News reported that Eskom estimates the country’s national grid would need around 2,000MW of additional, daily storage.

RedT’s machines are already in Africa. The Thaba Eco Hotel in Klipriviersberg Nature Reserve, just outside Johannesburg, has a solar array of 100kWp. It backed this up with diesel generators when the sun is not shining or when the grid cut out — neither of the two being uncommon.

The hotel has a 15kW, 75kWh RedT flow battery at the centre of a solar mini grid, replacing the diesel generators and allowing a section of the hotel to operate entirely off the grid. 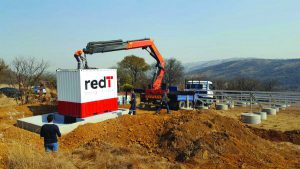 This is just the start of RedT’s potential in the continent. “Sub-Saharan Africa is a third market for us,” says McGregor.

“There are a lot of development projects, and rural projects for electrification — health clinics, for example. “We can also monitor them remotely,” he says. “So if it’s halfway up a mountain in Botswana, you don’t have to fly someone there — you can see what the issue is remotely.”

Not that there should be many issues to worry about. Another of the batteries’ advantages over the other chemistries available is their low maintenance requirements and less need for replacement parts.

Many of RedT’s machines are made by Jabil, the US-based global manufacturer that has plants all over the world, so the machines can be delivered anywhere.

And when it comes to vanadium supply, the fact that the electrolyte itself does not need to be replaced means its shouldn’t necessarily be an issue. In fact, it would even be possible for firms to rent the electrolyte off RedT and give it back to them if the machines were no longer needed. Vanadium itself, which was named after the goddess of beauty and fertility, is the 18th most abundant on Earth, coming ahead of copper, nickel or zinc.

“Because the electrolyte never degrades, it doesn’t have to be replaced,” says McGregor. “It can be in one system for 20 years then we can take it out and put it in another one.” 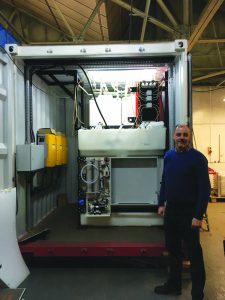 The exact cocktail ingredients for the electrolyte are proprietary, but in rough terms it is 70% water topped up with vanadium and sulfuric acid.

If 2017 marked a price tipping point, when customers began to realize the benefits and economics of energy-saving technology, McGregor believes 2018 will be dedicated to delivering all the orders the company has received. 2019, he says, will be the year of the mega projects.

“Lithium is great for cars, computers, mobile phones and so on, but in terms of national grid storage it can only play around the fringes,” says McGregor. “The only reason we haven’t yet had battery storage en masse is the price.”

And that reason, McGregor believes, is no longer valid.